Love of Israel and Pride 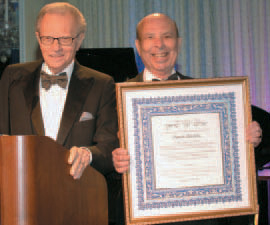 Over five hundred and forty eminent american friends and patrons of Rabin Medical Center gathered at the Pierre Hotel on October 30, 2005 to show their solidarity with the State of Israel and to acknowledge the outstanding accomplishments of Rabin Medical Center. Emceed by Larry King, master of ceremonies, kept the audience in stitches making jokes about the freezing temperature of the room, the dinner honored Patricia and Dr. Phillip Frost, distinguished drug entrepreneur and philanthropist, and honored the memory of Yitzhak Rabin on the occasion of the 10th anniversary of his assassination.

The dinner began with a reverential tone as Barry Cohen, Chairman of the AFRMC board of directors, asked the audience to remember Rabin with a moment of silence. King told of interviewing Rabin as he accompanied him on the campaign trail and of Clinton who had said to him that Rabin was his favorite Israeli leader. A modern-day expression of this love was the special gift donated by David Barouk to Rabin Medical Center. Responding to the plaque given to Barouk by Larry King in recognition of his generosity - a $2 million donation of a day-care floor in the Davidoff Center - Barouk spoke openly of his love for Israel and how his father had dreamed of helping his beloved state - a dream Barouk now fulfilled.

Stephen Siegel, President of the AFRMC board of directors, next took the podium to provide specific examples of how Rabin Medical Center could benefit from the purchase of specific equipment. And then, demonstrating his own generosity and attempting to inspire others to give, Siegel pledged to fund a closed incubator for newborn nurseries.

Mr. Arnold Burns, eminent attorney and dinner chairman, rose to introduce the well-deserved dinner honorees Patricia and Dr. Phillip Frost. Burns noted, "it is entirely fitting that we pay tribute to a man who is synonymous with the medical prescription industry." Recognizing Dr. Frost's endeavors as chairman and chief executive officer of IVAX Corporation, as well as his long and distinguished medical career, he also paid tribute to the doctor's wife, Patricia, for her lifelong philanthropic commitment to the arts, culture, and education through her work for the Smithsonian Institute and for institutions of higher education in the greater Miami area.

In response and in gratitude, Dr. and Mrs. Frost thanked the audience for the honor bestowed on them, but reminded everyone that the "real star is Rabin Medical Center, which is the backbone of medical care in Israel."

A true star of Rabin Medical Center, Professor Bernardo Vidne, Rabin Medical Center's world-renowned heart surgeon, was present this evening on the eve of his retirement and given AFRMC's first award for excellence for his groundbreaking research and treatment of cardiothoracic patients.

Of course, what would a gala be without entertainment, which was provided by the Jazz Museum in Harlem All-Star Band. Joining it was King's colleague and CNN anchorwoman Paula Zahn who pleased the audience with her jazz renditions on the cello.

It was then time for keynote speaker, Ambassador Dennis Ross's talk on peace prospects in the Middle East. Honorary Chair, Israel Ambassador to the United States, Daniel Ayalon introduced Ross as a personal friend and a major negotiator for peace who, over his illustrious career, had the opportunity to work with all the major players in Middle East politics.

Ambassador Ross praised Yitzhak Rabin as being the embodiment of the Israeli experience. "He spent his life as a warrior," Ross commented, "but ended his career as a champion of peace." Rabin, according to Ross, had a profound sense of responsibility to the Israeli people. That is why he planned for two strategies: one that would lead Israel to negotiate a peace treaty with the Palestinians and the other to unilaterally plan for separating Israel from any Palestinian influence.

Ambassador Ross went on to deliver a wide-ranging commentary on the state of the Middle East peace process, posing questions as Rabin might have on those long Sabbath afternoons when Ross was a guest in Rabin's home. Will the Syrian regime survive? Will Iraq be successful? Is Iran a real threat? Ross focused on the small window of opportunity that existed after Arafat's death, which the Palestinian Authority missed; that then left room for the more militant Hamas to gain wider influence. Ross even predicted that Hamas could win big in the Gaza elections, as they, of course, did if the United States failed to exert its influence on curtailing Palestinian Authority corruption.

A Dedication of Love

After the tragic loss of their son Chuck Trobman to cancer at only 25 years old, Phyllis, Malcolm and their son Les became acutely aware of the struggles faced by cancer victims.

A special interfaith mission to Israel, of Jews and Christians from New Jersey and across the USA, was launched in November 2006 under the leadership of Mr. William Sutter, head of Friends of Israel and Alan Respler, head of the Jewish Community Relations Council of Southern New Jersey.

Successful Tenth Annual Gala Dinner: Broadway On the Hudson Comes to the Intrepid