Giving Birth After a Lung Transplant 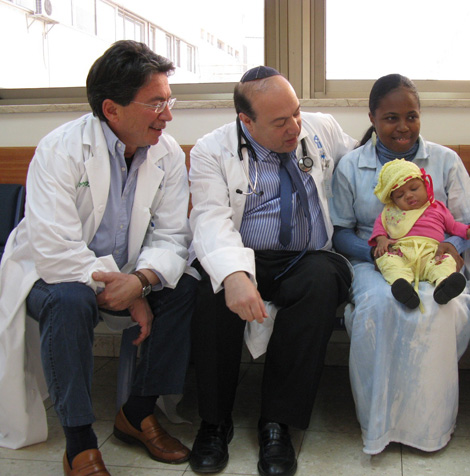 Over 9,000 babies were born at the Rabin Medical Center in 2010, but for some of those mothers the birth of their child was the realization of a dream that often seemed impossible.

Such was the case of Navit Peterson who after having a successful lung transplant decided to follow her dream of becoming a mother even though she knew it would be risky for both her and the baby.

It all began three years ago when she arrived at Rabin Medical Center. Prof. Mordechai Kramer, Head of the Pulmonary Institute remembered: "Navit arrived in critical condition suffering from severe lung damage and was unable to walk or breathe on her own. She needed a lung transplant immediately and was truly lucky that a matching lung soon became available."

Following the successful transplant Navit grew stronger every day and was soon leading a normal lifestyle. In spite of the risks involved Prof. Kramer gave her the go ahead to become pregnant and after three failed pregnancies she was able to carry a baby to term. Throughout her pregnancy, Navit was monitored by Prof. Moshe Hod, Head of the Maternal Fetal Division, Helen Schneider Women's Hospital at Rabin Medical Center, and recently gave birth to a healthy little girl.

During 2010, eighteen other women who had undergone transplants became pregnant and were treated in the Helen Schneider Women's Hospital Maternal Fetal Division at Rabin Medical Center, turning their somewhat distant dream of motherhood into a joyous reality.

For the first time in Israel, and one of the only few times worldwide, Rabin Medical Center achieved a successful heart and kidney transplant, saving a critically ill young man who had only days to live.

A Parent's Love Knows No Boundaries

For the first time in Israel and in a rare occurrence worldwide, a father has donated two of his own organs to his critically ill child.