Not Parkinson's at All 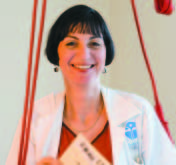 A common phenomenon among the elderly is sudden falls, the recurrence of which is often diagnosed by many physicians as the beginning of Parkinson's disease. Yet once they are treated with drugs for Parkinson's, they continue to fall because, as Director of The Clinic for Movement Disorders (part of the Department of Neurology at Rabin Medical Center) Dr. Ruth Djaldetti explained, patients are suffering from Posture and Imbalance Disorders and have simply been misdiagnosed.

Why the confusion? According to Dr. Djaldetti there is not enough awareness of this condition. So, when making a diagnosis, the first signs of this disease can point to Parkinson's, even though there are usually no other or only minor symptoms typically present in Parkinson's.

Posture and Imbalance Disorder are generally closely linked to infarction of small blood vessels in the brain and can be treated through rehabilitation. Yet, in either case, if the medication doesn't improve the patient's condition and there is still concern, an exact diagnosis can be made by taking a brain scan that can confirm the presence or absence of Parkinson's. Dr. Djaldetti points to the importance of diagnosing this condition at the earliest possible stage in order to receive the best possible treatment.

Results of Dr. Djaldetti's research were presented at the Conference of The Association of Neurology in Israel. Her observations will help many physicians clarify this problematic diagnosis.

Dr. Milton Saute, Director of the Lung and Cardiothoracic Surgery Department at Rabin Medical Center performed a rare operation to rebuild and widen the trachea of a 9-month-old infant at Schneider Children's Medical Center in Israel.

For the first time in Israel, and one of the only few times worldwide, Rabin Medical Center achieved a successful heart and kidney transplant, saving a critically ill young man who had only days to live.