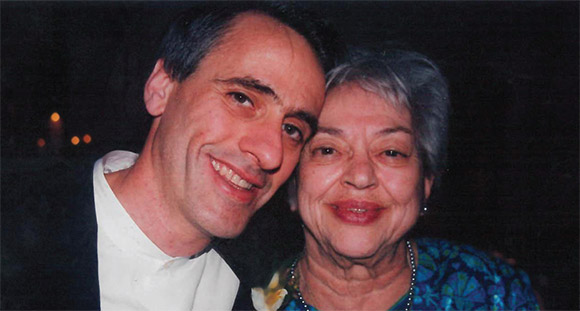 During a routine check-up while visiting Great Neck in 1972, my mother was diagnosed with breast cancer. She was fi fty-one. I was fi fteen. Immediately, my mother had a radical mastectomy with the removal of lymph nodes that left my mother, a pianist, with a lymphodemic arm. Radiation treatments burnt her lungs, causing a life-long bronchial cough. Fifteen years later, again while on a visit to the United States, breast cancer reappeared and my mother had a second mastectomy.

My mother’s illness never defi ned her. It simply became part of her life experience. She was public about her illness, even though women of her generation chose to be silent. Breast cancer could have subdued my mother’s spirit. Her illness occurred before the creation of support groups, reconstructive surgery, and partial lumpectomies. Despite her positive attitude in facing life, breast cancer caused my mother to feel isolated. She suffered. And yet, my mother was a role model. She personifi ed how to get on with the business of living, how not to let cancer beat you down.

After my mother’s passing in 2003 (not from breast cancer), her illness and my professional life merged. After twenty years as a congregational rabbi and university chaplain, a book author and photographer, in 2004 I responded to a new calling: charitable work at American Friends of Rabin Medical Center (AFRMC). I realized that charity work on behalf of Israeli healthcare could mobilize Jews in America, whether committed or unaffi liated, both young and seasoned professionals.

Indeed, the AFRMC charity has devised a dozen annual creative events to rally support in the United States around Israel and the Rabin Medical Center. In April 2011, around the time of my mother’s birthday, I created the NYC 5k Schlep: Run/ Walk for Breast and Ovarian Cancer awareness to honor my mother and realize her dream for excellent Israeli healthcare. In its inaugural year, the NYC 5k Schlep was featured in the Wall Street Journal. The focus of the NYC 5k Schlep (yes we do it without marketing firms and large corporate sponsors) is to raise awareness of BRCA genes that, if detected early in the breast, ovary, prostate or pancreas, can save lives. One out of seven Jewish women will be diagnosed with breast cancer. BRCA testing must become commonplace. Now in its sixth year, every June we congregate at the NYC 5k Schlep in Manhattan. Our runners and walkers, from 7 to 92-years young, come from all over. They cumulatively raise substantial funds via the internet for a BRCA Multi- Disciplinary Screening Clinic at the leading cancer center in the State of Israel, Rabin Medical Center.

Each year we raise awareness by asking people to schlep for somebody they know with cancer, to support the yearning to survive and live with dignity. Soon, we will spread hope across the country, by launching a similar grass-roots movement in Los Angeles, Miami, Chicago and elsewhere. Please join us to honor our loved ones who face cancer and to provide them with encouragement and the strength to survive.

In continued support and friendship with Rabin Medical Center, Harold and Tamar Snyder have generously funded an internship in the field of gynecology.

For more than a century, researchers were puzzled by the uncanny ability of cancer cells to evade the immune system. The answer arrived with a bonus: a way to thwart a cancer’s strategy.