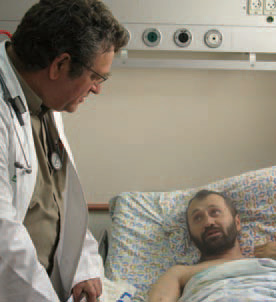 Dr. Michael Stein with one of the wounded.

At the request of Israeli Knesset member Avraham Michaeli, who immigrated to Israel from Georgia in the former Soviet Union in 1957 and heads the Committee for Humanitarian Aid, three people wounded in the war in Georgia were flown to Israel and brought to Rabin Medical Center for treatment. All three patients were injured by gunfire and suffer from shrapnel wounds. After arriving at the hospital, the wounded were assessed by the Trauma Team, headed by Dr. Michael Stein. The victims will all need to undergo surgery and rehabilitation.

It is not by chance that the victims were brought to Rabin Medical Center. Since its establishment over 70 years ago, the hospital has always provided humanitarian assistance and is known for its superior level of medical care, its experience in treating victims of war and disaster and its exceptional National Level One Trauma Center.

Hundreds of heart and lung transplant patients, along with their families and the medical teams that saved their lives, gathered recently at a special celebration arranged by Rabin Medical Center.