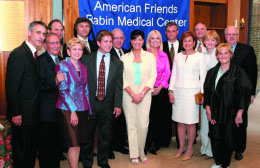 AAFRMC hosted Nava Barak from Israel for a series of successful events on behalf of the hospital.

Yvonne Cohen hosted an intimate women's luncheon for supporters featuring Nava Barak, joined by the wives of Israeli diplomats, including Ruth Mekel, Consulate General Aryeh Mekel's wife, and Janice Gillerman, the wife of Israel's UN Ambassador, Dan Gillerman. Nava shared her personal history and how her tenure as Israel's first lady shaped her values of giving and volunteerism. Ruth Mekel, who serves as the Director of Tourism for the Israeli Consulate, spoke enthusiastically about the wealth of Israeli culture in New York, especially in the arts and film.

Jacki and Joel Florin hosted a cocktail reception on June 2, 2005 honoring Nava at their home in Brookville, New York. After the lyrical humor and piano playing of Rick Crom, everyone listened to AFRMC Chairman Barry Cohen and Executive Director Joshua Plaut speak on the Rabin Medical Center as a temple of medicine and hope for the Middle East. More than forty guests enjoyed Nava's enchanting stories of her experiences as Israel's former First Lady and her work with the hospital. By the end of the evening many new Long Island friends had committed themselves to visiting and helping the hospital.

Cherry Hill, New Jersey will never be the same after Nava Barak appeared as guest of honor to lead an evening of tributes to Malcolm and Phyllis Trobman and noted Holocaust educator Andy Friedman. The event raised money for the Rabin Medical Center's Charles E. Trobman Oncology Data Management Center. This Center is a significant component of the new Cancer Center and is designed to track clinical trials and interpret experimental data for cancer treatment.

The event attracted over three hundred friends. Cherry Hill Mayor Bernie Platt honored Andy with a City Council proclamation. Marvin Schlanger, CEO of a global specialty chemical company, served as the master of ceremonies and Deedee Fein, Co-Chair of the Committee, introduced the guest speakers who were united in their enthusiasm for the role America plays in supporting Israel and Rabin Medical Center.

New Jersey Congressmen James Saxton and Robert Andrews spoke of the partnership that America and Israel have in combating terrorism and in championing the peace process. Both Congressmen Saxton and Andrews shared many kind words for Andy Friedman and her work as a teacher of Holocaust history.

Over 130 physicians and medical personnel from the Israel Defense Forces Medical Corps participated in a one day seminar organized by the Department of Hematology.

Hundreds of heart and lung transplant patients, along with their families and the medical teams that saved their lives, gathered recently at a special celebration arranged by Rabin Medical Center.