A Parent's Love Knows No Boundaries 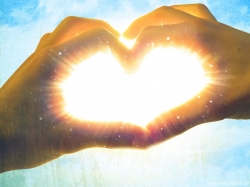 For the first time in Israel and in a rare occurrence worldwide, a father has donated two of his own organs to his critically ill child. In early December forty-seven year old Hasin Ata donated one lobe of his liver and one of his kidneys to save his son's life.

The 19 year old boy suffered from a rare genetic disease since birth which affected his liver and his kidneys as well as other organs. He needed to have dialysis several times a week from an early age. His only hope for survival was a liver and a kidney transplant, and his father, 47 year old Hasin Ata from a village in the Galilee was adamant to save his son, even if it meant giving him the organs himself.

The liver lobe transplant was performed at Rabin Medical Center six months ago. Since that time the father's liver grew back to 90% of its original size, and he fully recuperated and was then able to donate one of his kidneys. The kidney transplant, performed at Rabin Medical Center, was successful as well and both the father and the son are in excellent condition. This rare double organ transplant from the same donor shows that there are truly no limits to the love of a parent for his child, a selfless love that knows no boundaries.

Prof. Eytan Mor, Director of the Transplant Department at Rabin Medical Center, said: "Until now patients who required two organs received organ donations from people who had died so I truly hope that this father's noble gesture will open the door for further live organ donations. I have no doubt that if this father had not donated these organs, his son would still be waiting for an organ donation since there is such a shortage of organs in Israel and around the world. This transplant therefore offers new hope and is of crucial significance to the many people waiting for organ donations, especially since organs donated from the same donor are less likely to be rejected by the organ recipient. The liver is known to protect the kidney against rejection and in this kind of double transplant from the same donor there is a much greater chance for the kidney to function properly for a longer period of time."

Rabin Medical Center is Israel's leader in organ transplantation, performing 70% of all transplants in Israel.

Two families donated the organs of their brain-dead loved ones over the weekend, resulting in eight organ transplants in hospitals around the country.

The Case of the Mysterious Cough

After eleven years of suffering from a persistent cough, for which there seemed to be no diagnosis or cure, Natan, age 61 is finally cough free.

A year ago, 71 year-old Gershon Gefen underwent a heart transplant with the "Heart 2 device," a permanent artificial heart, at Rabin Medical Center's Cardiothoracic Surgery Department, headed by Dr. Eyal Porat. Going abroad was the last thing on his mind.