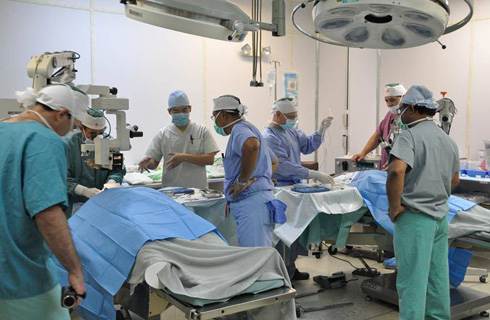 Many Micronesia and Marshall Islands residents can now see again thanks to the recent visit of a team of Israeli ophthalmologists including the Rabin Medical Center's Prof. Dov Weinberger, Head of the Department of Ophthalmology and Dr. Iftach Yasur head of the Oculoplastics Service.

Leaving behind their modern operating theaters, advanced equipment and air conditioned homes Prof. Weinberger and his team traveled three days to the other side of the world. Here under less than optimal conditions they worked from morning to night to restore sight to local residents and performed over 150 procedures including cataracts, laser and retinol surgery and laser treatments, many relating to diabetes which is a severe problem in this area. Welcomed with open arms the doctors were treated graciously by the hospital staff and received endless kindness by all their patients, as they brought hope and light to many people who had previously lived in darkness. The Israeli medical staff also demonstrated surgical techniques to local medical teams so the important work could continue after they left.

One elderly man, who was blind, was led into the operating room by his wife and was able to walk out of the hospital on his own with his sight restored. So grateful for his renewed eyesight he returned to the hospital several days later bearing special Marshall Island handcrafts. Though both Dr. Weinberger and Dr. Yasur had participated in other humanitarian missions around the world they both felt that this was by far the most challenging assignment they have tackled thus far and have no doubt that they left behind a lasting impression of Israel and of its professional medical abilities.

His Memory Lives On

Rafael and Carmit Biel wanted nothing more than to have a child.

The Case of the Mysterious Cough

After eleven years of suffering from a persistent cough, for which there seemed to be no diagnosis or cure, Natan, age 61 is finally cough free.