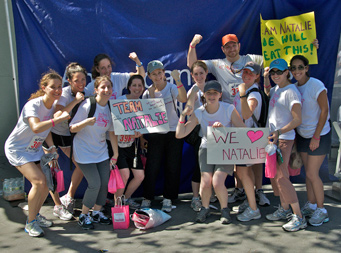 On July 17, over 200 breast cancer advocates gathered on a warm and sunny morning in downtown Manhattan to participate in the first-ever Jewish breast cancer run/walk in the United States. The event was co-sponsored by Shleppers Moving and Storage, Zuckers Bagels, El Al Airlines, JCP Downtown, Sharsheret, Genentech, and Shiboleth. "It was the memory of my mother Hadassah, who had breast cancer twice," said Dr. Joshua Plaut when asked what prompted him to organize the NYC Schlep: Jewish Breast Cancer 5k Run/Walk.

"One in seven Jewish women will be diagnosed with breast cancer in their lifetime," said Plaut, who is the executive director of American Friends of Rabin Medical Center, the New York-based non-profit that organized this event. The race attracted runners of all ages and all parts of the country. Runners came from as far away at Houston, St. Louis, and Washington D.C. to participate in the event. Ages of the participants ranged from 7-year-old Tani Leitner who completed the race in 37 minutes to 88-year-old Grace Salant, who completed the entire course in just over one hour. Larry Glazer, a 49-year-old male and Jenna Weinberg, a 22-year-old female were the race winners with times of 20:18 and 24:32 respectively.

New York State Assemblyman David Weprin, who is also running for the Congressional seat vacated by Anthony Weiner, addressed the 200 runners and walkers. "All of us are partners with AFRMC to raise awareness of breast cancer among Jewish women in the United States and Israel," he said.

The event was overwhelmingly successful for AFRMC. The NYC Schlep raised all of its donations online for a breast cancer research project at Israel's Rabin Medical Center. Of that total, an impressive 110 donors were organized in Team Natalie, a group of runners who have rallied around a 27-year-old newly diagnosed breast cancer patient in California. The team raised over $21,000 from donations that were received from across the country, including Baltimore, Seattle, Houston, Washington D.C., Pittsburgh, Los Angeles, Durham, Boston, Miami, Cleveland, Philadelphia, Chicago, Birmingham, Iowa City, Atlanta, Scottsdale, Denver, Madison, Anchorage, San Francisco, Memphis, and Telluride. International donations came in from as far away as Singapore, Hong Kong, Toronto, Tel Aviv, and Johannesburg

The Schlep will help to fund research performed in Israel at the Rabin Medical Center to investigate the prevalence of metastatic breast cancer disease in women who are genetically predisposed. Developing an understanding of how this disease arises will help doctors prevent its occurrence, allowing women to overcome a disease which today is essentially incurable. More broadly, breast cancer is one of the most common cancer diagnoses affecting Jewish women in the United States, Israel, and across the world. Research that can find a cure will help the nearly 1.5 million women, of every race and religion, who are diagnosed with breast cancer each year.

It's not too late to support the NYC Schlep!

Seventy year-old Gershon Gefen was not thinking about a trans-Atlantic flight to the United States when in mid-2008, doctors in the Cardiothoracic Surgery Department of Rabin Medical Center, transplanted Heart Mate II, a permanent left ventricle assist device.