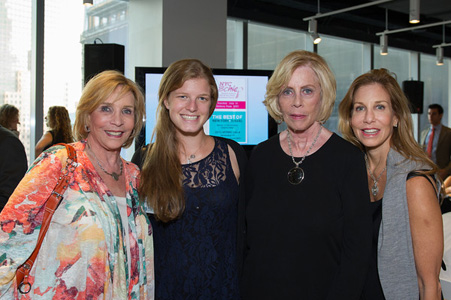 The event was sold out with two hundred and fifty guests in attendance. The exclusive networking event celebrates the revitalization of downtown Manhattan, held on the tenth floor of 7 World Trade Center. Attendees were treated to close-up views of 1 World Trade, the rising Fulton Transit Center and the reflecting pools at the 9/11 memorial.

The event began with participants taking a private tour of the 9/11 memorial with lead designer Michael Arad of Partner Handel Architects. Those on the tour gladly braved the heat for this once on a lifetime opportunity in order to learn more about Arad’s vision to commemorate the tragedy of 9/11.

Following the tour, a networking reception at 7 World Trade center included a speech by Janno Lieber, President of the World Trade Center Properties, LLC, in which he drew a parallel between the work of Yitzhak Rabin and that of renewing downtown. Janno declared,

“Rabin was a bold leader for Israel just as downtown needs bold leaders.”

After his speech, an uplifting movie on the progress and future of the World Trade Center site was shown. His message resonated with guests of the event, as its’ overall goal was to benefit the future Emergency and Trauma Center at Rabin Medical Center in Petah Tikva, Israel.

The Annual Celebration of Real Estate Development was a huge success, and all who attended were treated to a memorable evening.

Keeping the Past Alive With Joy

Although Rabin Medical Center has become a unique and modern facility, it has never been far from its Zionist roots.