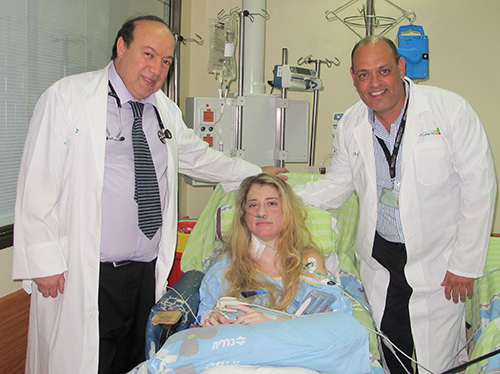 While all was still throughout Israel on Yom Kippur, the holiest Jewish holiday, Rabin Medical Center was busy saving lives by performing seven organ transplants in a period of only 48 hours.

An expert team which included staff members from the departments of Cardiothoracic Surgery, Transplantation, Anesthesiology, the operating room, the blood bank, and others worked around the clock to perform these transplant operations.

Dr. Benjamin Medalion, Head of the Heart and Lung Transplantation Unit, Department of Cardiothoracic Surgery at RMC says, "We worked feverishly before and during Yom Kippur. I managed to eat a meal before the fast, rest a few hours and then again I was called to perform another transplant. Multiple transplants can only happen thanks to truly noble families who agree to donate the organs of their loved ones."

"What an unbelievable moment it was [right before the Yom Kippur fast], to tell a family that their loved ones were about to get a new life. Although I am a religious man, saving lives is above all else, and even while fasting I stayed in touch with the families and the doctors"; says Prof. Mordechai Kramer, Head of the Institute for Pulmonary Medicine at RMC.

It was a truly a special Yom Kippur at Rabin Medical Center.

Fewer than 20 such operations have been performed anywhere!
by JUDY SIEGEL-ITZKOVICH, Jerusalem Post

Rabin Medical Center, affiliated with the Tel Aviv University Sackler School of Medicine, is one of the largest and most distinguished academic medical institutions in Israel.