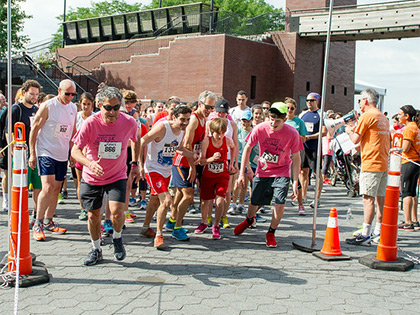 Supporters helped fund the cause by making teams to either help fundraise or participate in the NYC 5k Schlep. The race attracted runners of all ages and backgrounds from all parts of the world. Runners came from as far away as California, Texas, Canada, and even Australia to participate in the event.  Ages of participants ranged from 9-month-old to 91-year-old Grace Salant, both completing the entire race course.

Donations were received from across the country, including Dallas, Los Angeles, Miami, Baltimore, Las Vegas, Washington D.C., Beverly Hills, Atlanta, Chicago, Charlotte, Philadelphia, Denver, and Boston. The race was opened with remarks from AFRMC Executive Director, Joshua Plaut, PhD. and was followed by CEO of American Self Storage, Warren Diamond, who spoke of the memory of his late wife, Cheryl Diamond’s battle with breast cancer.

Breast and ovarian cancers are the most common cancers afflicting women in the United States and Israel. One in seven women will be diagnosed with breast cancer and over 22,000 women will be diagnosed with ovarian cancer annually. Proceeds from this event benefitted the BRCA Multidisciplinary Clinic to serve women at high risk of breast and ovarian cancer at Rabin Medical Center’s Davidoff Cancer Center- a world class facility whose sole focus is on the treatment and prevention of cancer.

Thank you to our supporters and participants of this record breaking. We hope to see you at our June 2015 Cheryl Diamond NYC 5k Schlep: Breast & Ovarian Cancer Run/Walk!

If you would like to make an additional donation for breast and ovarian cancer research, please visit the SCHLEP website at: afrmc.kintera.org/schlep2014!

A special delegation of senior cardiologists from China recently visited the Rabin Medical Center where they were hosted by the Department of Cardiology, directed by Prof. Alexander Battler.

Seventy year-old Gershon Gefen was not thinking about a trans-Atlantic flight to the United States when in mid-2008, doctors in the Cardiothoracic Surgery Department of Rabin Medical Center, transplanted Heart Mate II, a permanent left ventricle assist device.

Four Owe Their Lives to Victim of Pre-Passover Road Accident

A 27-year-old man from Kibbutz Tzova, who was born with a serious congenital defect, received a heart and two lungs just before Passover in a rare, lifesaving operation.