Four Owe Their Lives to Victim of Pre-Passover Road Accident 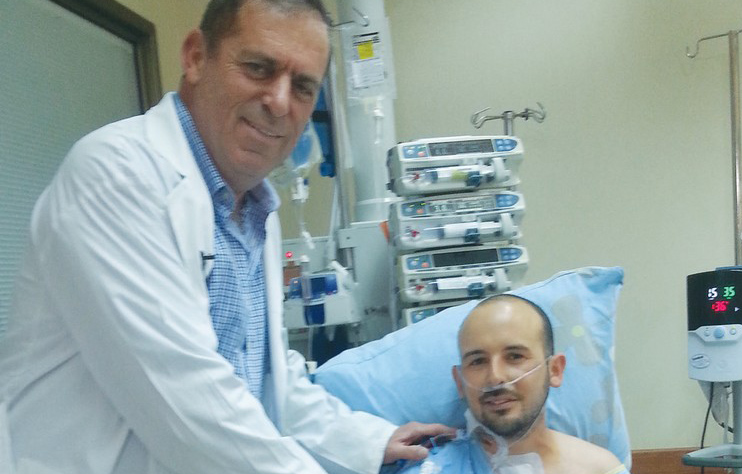 A 27-year-old man from Kibbutz Tzova, who was born with a serious congenital defect, received a heart and two lungs just before Passover in a rare, lifesaving operation.

The transplant was performed by Prof. Dan Aravot and his team at the Rabin Medical Center-Beilinson Campus in Petah Tikva. The recipient, Ran Azulai, had increasingly difficult heart failure as time passed. Because of the problem he underwent three cardiac operations. When his condition spread to his lungs, causing pulmonary hypertension, he needed a transplant of the three organs.

On Friday, he was told the good news – that a heart and lungs reached the hospital.

The eight-hour surgery was successful, and he is recovering in the hospital's cardiopulmonary intensive care unit. His new heart and lungs immediately started to function. He is breathing without a respirator.

Aravot said that it was an unusual operation because of the three operations he previously had. "I am happy that we met the challenge and succeeded in giving him a new life."

Prof. Mordechai Kramer, head of the pulmonary institute at the hospital, said Azulai's condition had been so bad that his team had started to look for a transplant center abroad that would do the operation, as it is rare to find here all three organs simultaneously. "We decided that morning to put him at the top of the list because of the urgency, and fortunately, the same time, the heart and lungs became available."

Dr. Tuvia Ben-Gal, head of the cardiac insufficiency unit in the cardiology department, said that Azulai had "a few weeks to live in his situation, and we understood his time was running out despite our efforts.

Even abroad, he would have had to wait a long time to get the organs. But against all odds, the donation arrived, and his life was saved."

The Israel Transplant Center announced that the deceased donor of the three organs, and more, was Tzuf Lifschitz, 22, who was brain dead on Thursday night after a serious road accident. The family agreed to donate not only his heart and lungs, but also a kidney to an 18-year-old woman at Rambam Medical Center in Haifa; the liver to a 26-year-old man at Tel Aviv Sourasky Medical Center, and the other kidney to a 56-year-old woman at Beilinson.

All of the recipients are in stable condition.

Eight Israelis were given a second chance at life this week as doctors at Rabin Medical Center's Beilinson Hospital performed several complex transplant operations over just a few days.

This year's Miami Tropical Half-Marathon in January brought runners and observers to motivate and encourage the Trobman Family in their effort to combat cancer.

Is the Cost of Cancer Medication Worthwhile?