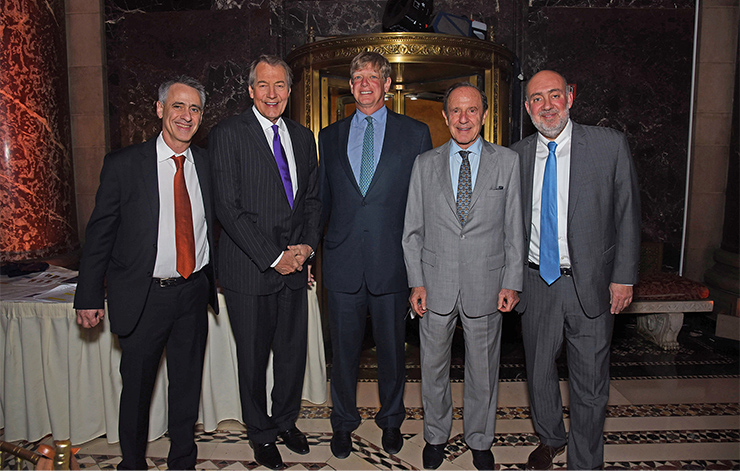 With open hearts and strong minds, the American Friends of Rabin Medical Center (AFRMC) raised substantial funds for urgent medical equipment at their 15th Annual Gala. The evening of solidarity to benefit Israel’s Rabin Medical Center was a tribute to Stanley and Cookie Chera, their sons, and to Crown Acquisitions. Six hundred celebrants gathered at Cipriani 42nd Street in New York City for the annual gala that benefited fifteen new Rabin Medical Exchange Fellows, and the Cohen Cardiac Medical Research and Moinian Neurology Funds. Over the past four years, AFRMC has funded 40 fellows. In 2015, fifteen new Rabin Medical Center doctors will come to learn, observe and practice in American medical centers.

Stanley Chera was honored with the Yitzhak Rabin Excellence in Leadership Award for his position as a community leader and legendary businessman. In gratitude to the honoree, Israel’s Rabin Medical Center proudly announced the naming of the Stanley and Cookie Chera and Family Pulmonary Institute. “Thank you, Stanley for your kindness, generosity and your big heart. You are truly a shining light,” said Rabbi Joshua Plaut, Executive Director of American Friends of Rabin Medical Center.

AFRMC gave Stanley Chera a surprise gift, a video tribute by some of his closest friends in the real estate industry (who were also present at the gala), which included remarks by Jon Mechanic, Ben Ashkenazy, Jared Kushner, Jane Goldman, Senator Schumer, Eli Gindi and Bill Rudin. In the video, Lloyd Goldman, Gala Chair and Founder of BLDG Management, reflected: “Rabin Medical Center is about taking care of people. Stanley understands that Jewish values are about taking care of people in the community. Rabin Medical Center is the epitome of how Israel should be known, taking care of people and the community.” Jonathan Mechanic from Fried Frank remarked how “Stanley is incredibly creative, ingenious and has a host of relationships,.” New York Senator Charles Schumer, mentioned that in the thirty years he has known Stanley Chera “he’s always ask me to help people in the community who needed help with no benefit to him.”

The Rabin Medical Center, named for Prime Minister Yitzhak Rabin, is committed to the development of state-of-the-art medical innovation, technology and research while treating one million patients annually. The gala celebrated the August inauguration of Rabin Medical Center’s new Emergency and Trauma Center, a 54,000 square foot facility, which is the largest in the Middle East. During the war with Hamas in Gaza, the hospital treated wounded soldiers and traumatized citizens in the new facility.

Master of Ceremonies, Charlie Rose, whose nightly talk show is on PBS, spoke about the value of international medical care. “We share a commitment to provide quality healthcare to our citizens,” said Rose. “Both America and Israel are global partners, fostering and sharing medical advancements for the betterment of humanity,” he continued. The Rabin Medical Center cares for 1 million patients annually. “This hospital truly fulfills Yitzhak Rabin’s dream of coexistence, providing humanitarian aid in places such as India, Haiti, and Africa. Rabin Medical Center also serves as a bridge to peace with Israel’s Palestinian neighbors,” said Rose.

A gala highlight was when Charlie Rose interviewed His Excellency, Ambassador Ron Prosor, Israel’s 16th Permanent Representative to the United Nations and Mortimer B. Zuckerman, Chairman and Editor-in-Chief of US News & World Report and Executive Chairman of Boston Properties Inc. They discussed recent developments in Middle East politics.

The gala’s attendees were treated to a sneak preview of Broadway’s Doctor Zhivago, opening at the Broadway Theater in April 2015. Two songs from the new musical were performed for the first time in the United States.

The gala ended with a two song tribute to Stanley Chera and all of his guests--featuring Hugh Panaro, the star who played the Phantom in Phantom of the Opera, and Rita Harvey, who played the role of Christine Daee.

The 2014 gala was a beautiful tribute to the accomplishments of Stanley Chera and Rabin Medical Center. The evening funded burn unit equipment for soldiers and emergency & trauma equipment. By putting hearts and minds together, American Friends of Rabin Medical Center’s celebrated its role in the advancement of medicine and technology on a global scale.

A Brother Affirms His Sister's Life