A Surprising Presentation at the RMC 2012 Orthopedic Conference 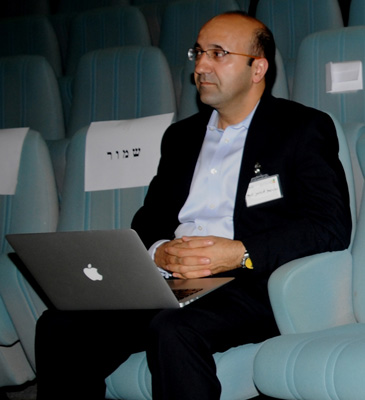 At this year's Rabin Medical Center Orthopedic Conference in March, attendees were surprised when renowned surgeon Professor Jarvid Parvizi took the stage to give a lecture. Parvizi, an Iranian orthopedic surgeon at Thomas Jefferson University in Philadelphia, flew to Israel for one day in order to participate in the conference, despite the intensive security checks he had to undergo upon arriving. Along with Parvizi, orthopedic surgeons, infections disease physicians, and scientists gathered together in Israel at this conference in order to tackle the management of acute infections following orthopedic surgery.

After his passing in 2007, beloved orthopedic surgeon Dr. Ari Bachar was memorialized in this annual conference organized by his colleague Dr. Steven Velkes, head of the Department of Orthopedic Surgery at Rabin Medical Center. Bachar worked at the Rabin Medical Center for over 20 years, specializing in sports medicine. The conference held in his honor brings together leaders in the field in order to focus on different areas of orthopedics.

In addition to Parvizi's surprise presentation, three experts from Switzerland also lectured at the conference. Overall, the RMC Orthopedic Conference was very well attended and received a lot of positive feedback. Furthermore, the possibility of an orthopedic fellowship in Switzerland for both an orthopedic as well as an infectious disease resident was discussed. Additionally, a yearlong fellowship for an orthopedic resident at the Rothman Institute at Thomas Jefferson University, under the supervision of Parvizi, was also discussed, for the coming year.

Following the conference, Parvizi wrote to Velkes praising him for his work on the conference as well as his generous hospitality. He expressed his desire to work together again in the future. Overall, the RMC was a huge success and a lot was accomplished.

The annual American Friends of Rabin Medical Center Women's Luncheon was hosted by the Israeli ambassador to the United Nations and his wife, Ambassador Dan and Janice Gillerman, in their Manhattan home.

The Future of Genetics

The Third International Advisory Board Meeting and Symposium of the Raphael Recanati Genetic Institute was recently held at Rabin Medical Center.

A new world-class hybrid catheterization suite, the most advanced of its kind and the first one in Israel, was recently inaugurated at the Interventional Cardiology Institute at Rabin Medical Center, directed by Prof. Ran Kornowski.