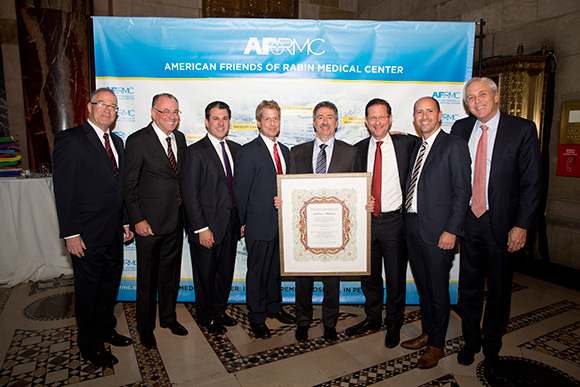 The evening began with an uplifting rendition of both the American and Israeli national anthems by the local children’s choir, The Harmonizers from the Upper West Side’s Abraham Joshua Heschel School.

Guests, including honorary Board Members Professor Alan Dershowitz and Mort Zuckerman were surprised by a video message from Honorary Gala Chair, and close friend of Prime Minister Rabin, President Bill Clinton who, in a video message, shared words of congratulatory support for American Friends of Rabin Medical Center and reminded all that in reflecting on the convictions of Yitzhak Rabin we must “find new ways to rededicate ourselves to the goal for which he gave his life.”

American Friends of Rabin Medical Center President, Ron Cohen, Jones Lang LaSalle, gave recognition to the organization’s original founders “the effort that they devoted to what was then a budding organization was only surpassed by their enthusiasm; and thus, began a tradition, for the past 20 years, we have been proud to cultivate and continue.” Cohen was joined on stage by Peter Riguardi, Jones Lang LaSalle, Chairman of American Friends of Rabin Medical Center, who welcomed guests stating “tonight we honor a great New Yorker. A real market leader, Jon Mechanic. Jon, your colleagues friends and clients have supported tonight in an overwhelming fashion. Thank you for making this happen tonight. Rabin Medical Center is growing, is flourishing and its partners in New York are really a part of what makes this happen.”

American Friends of Rabin Medical Center’s President Emeritus, Stephen Siegel, CB Richard Ellis, paid tribute to the evening’s honoree, Jon Mechanic stating “to me Jon is not just an icon and one of the best real estate attorneys not just in New York City but anywhere I’ve ever experienced. He is prolific beyond any words to describe it and in spite of that he is a great friend. His philanthropic efforts are second to none” as he called to the stage, Jonathan Mechanic, this year’s recipient of the Yitzhak Rabin Excellence in Leadership Award.

In a heartfelt speech fellow board member and gala chair Ricky Chera described Jon Mechanic as being “akin to a Frank Gehry skyscraper. A one of a kind masterpiece commanding the skyline amongst giants.  Or are a Hemingway novel, Jon’s life, eloquently measured yet sophisticated and busy.  Jon is a giant among giants. “

In thanking the board after the 2015 gala, Woody Goldberg stated “It was an evening we shall never forget! From your warm welcome, to the obvious success you have had in nurturing the "seed we planted more than 20 years ago", bringing AFRMC to prominence, to the ambiance of the venue, outstanding programming, fine food service, and the "tribute" you paid to Miriam and me in behalf of other "Founders", we simply were in awe of what you have made possible for RMC through your masterful leadership of AFRMC!”

Master of Ceremonies, Charlie Rose returned for the sixth year sharing a tribute to Yitzhak Rabin produced by the Charlie Rose’s PBS Television Show team. Joining Charlie Rose for an onstage interview was Ambassador Martin Indyk, the Executive Vice President at The Brookings Institution in Washington D.C., who is an expert on Middle East politics, and as former U.S. Ambassador to Israel knew and worked closely with Yitzhak Rabin. In addition to reflecting on his professional relationship with the Prime Minister Ambassador Indyk recalled where he was the night of Rabin’s death. The room stood silent as he shared with all the first words of Leah Rabin who took a call from the President upon hearing of her husband’s assassination.

The night concluded with a musical performance from Broadway singer, Jeannette Bayardelle who entertained the audience with her rendition of Natural Woman from Broadway’s Beautiful and Hair’s Age of Aquarius.
The evening was an emotional tribute to Yitzhak Rabin. Tali Rabin, daughter in law of Yitzhak, was in attendance with her daughter, Omer Rabin, who is Yitzhak’s grand-daughter. In a message sent to Executive Director, Joshua Plaut, She shared the following; "It was an amazing gala. Omer was so excited and moved from the love and respect to Yitzhak expressed at the gala. On the way home, she said to me that she wishes she could see him (Yitzhak) for two minutes to tell him how much the world misses him. It was a powerful night for me and for her."

With appreciation for the great support of his friends and colleagues honoree, Jon Mechanic addressed the audience reminding them of the evening’s true mission. “Tonight and in other times, the people here who support the Rabin Medical Center are taking important steps to ensure that Israel continues to have some of the world’s best medical facilities to combat the wounds of war and terrorism as well as the health challenges without regards to events rising out of the current political situation.”

It was an extraordinary evening as guests joined together in support of the hospital, as expressed by President Clinton, “to celebrate the special relationship that exists between Israel and the United States by prioritizing common humanity and helping to fulfil Yitzhak Rabin’s vision.”
The gala supported the Cohen Cardiac & Medical Research Fund, the Moinian Neurology Fellowship, The Trobman Oncology Fellowship, The Davidoff Cancer Center, The Cohen Facial Reconstruction Fund and the Rabin Medical Exchange Fellows and nursing scholarships.

American Friends of Rabin Medical Center (AFRMC) held its Second Annual charity Golf Tournament on May 5, 2008, at the prestigious Quaker Ridge Golf Club in Scarsdale, New York, under the outstanding leadership of Stephen Siegel, the global chairman of CB Richard Ellis, and AFRMC Board President.

Family of girl who died of edema of the brain say saving lives foremost, organ donations commemorate her life.

The Pride of Israel: The Past Year at Rabin Medical Center