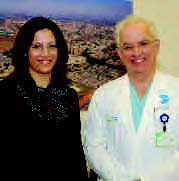 In continued support and friendship with Rabin Medical Center, Harold and Tamar Snyder have generously funded an internship in the field of gynecology. This grant has been awarded to Dr. Abeer Massarwa, a young physician from the city of Taybi, located northeast of Tel Aviv in an area with a large Israeli Arab population. The six-year specialization program will take place under the supervision of Dr. Marek Glazerman, Director of the Women's Hospital at Rabin Medical Center, and will enable Dr. Massarwa to fulfill her dreams of becoming a gynecologist who can provide essential gynecological services to the women of her community. She hopes to combine her work in the hospital with work in her community, advancing women's healthcare in the Israeli Arab population, where many stigmas still exist that require women physicians whom women in the community can trust and depend on. She also hopes that by being an Arab female gynecologist, she will become a role model and have an opportunity to increase the status of both Arab and Jewish women across the country.

What is Gender Medicine?

Gender Medicine is the field of medicine that studies the biological and physiological differences between the human sexes and how that affects differences in disease.

The First Female Gynecologist from the Israeli Druze Community

Hanna Nabwani, a young medical student from the small town of Julis in Israel, aspires to be the first Druze woman to earn a graduate medical degree and the first to offer gynecological care to the women of her community.

The Snyder Fellowship: Caring for the Arab Israeli Community

Infectious diseases are a major cause of mortality and morbidity, accounting for 25 percent of all deaths worldwide, a totaling 17 million deaths per year.