Miracle in the Delivery Room 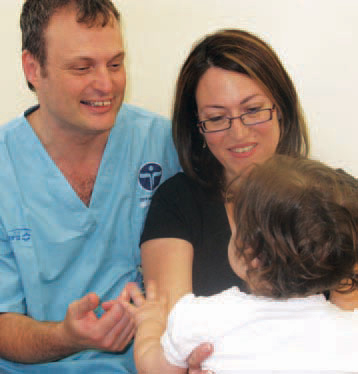 Smadar Alon with her baby daughter and Dr. Yoav Peled

As Smadar Alon prepares to celebrate her daughter's first birthday, she cannot help but remember how they both almost lost their lives.

Only a day before she was scheduled to have a C-section, Smadar arrived at the Emergency Room suffering from severe abdominal pain. She was quickly hooked up to a fetal heart monitor, which only detected a very weak fetal heart beat, a disturbing and extremely dangerous situation at this stage of pregnancy. Dr. Yoav Peled, a senior gynecologist at the Helen Schneider Hospital for Women at Rabin Medical Center, was on call and rushed her to the Operating Room.

Dr. Peled performed an ultrasound that showed that the fetus was not in the usual position. It was clear that every second was critical, and so Dr. Peled and an operating room team performed an emergency C-section. When Dr. Peled performed surgery, he found the uterus completely ruptured and was shocked not to see a fetus. He began searching further and finally located the baby below Smadar's diaphragm. After giving the baby to the attending pediatric team, he continued to treat Smadar, who was in danger of bleeding to death.

The baby, who had been in extreme distress, slowly began to recover and was placed in the Intensive Care Unit for monitoring. Smadar began to recover as well, not yet realizing that a real miracle had occurred.

Dr. Marek Glezerman, head of the Helen Schneider Hospital for Women at Rabin Medical Center, explained the gravity of the situation: "It is extremely rare when a woman arrives at the hospital with a ruptured uterus and goes home with a baby. Few such instances have occurred worldwide, and these have been documented in medical journals. But it is even more amazing when the woman goes home with a baby who shows no signs of any cognitive and motor impairment. We are really speaking of an extraordinary case, and a decision was made to watch the baby's development for a year before reporting this true miracle of life. I am happy to report that now a year later the beautiful baby, named Yael, is developing normally." There is no doubt that the lives of Yael and her mother Smadar were saved due to rapid diagnosis of the severity of the situation and the immediate treatment by Dr. Peled and the attending staff.

Under the leadership of John J. Sciarra, MD, Ph.D., a group of fifteen OB/GYNs from across the U.S. and the Bahamas visited Israeli's Rabin Medical Center.