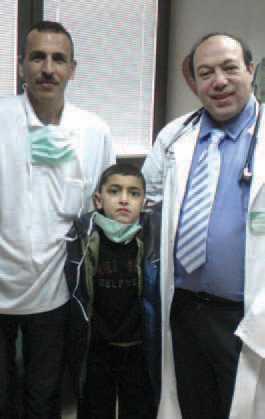 Abu Chadaid Nabil, an 11 year old Arab boy from Khan Yunes, in the Gaza Strip, underwent a lung transplant at Rabin Medical Center in April 2008. Abu Chadaid had suffered from end stage bronchiectasis since early childhood, a lung disease very similar to cystic fibrosis, and his condition deteriorated very quickly during the short years of his life. He was near death when a matching lung was found.

Rabin Medical Center is the only medical facility in Israel which performs lung transplantations, and Abu Chadaid was rushed to the hospital where a successful transplant was performed. Abu Chadaid Nabil continues to be under the care of the dedicated staff of the Institute of Pulmonary Medicine at Rabin Medical Center of Petach Tikvah, with special supervision from Professor Mordechai Kramer. Following the transplant the little boy has returned home, but unfortunately conditions in Gaza are not optimal for his recuperation. His family is very poor and do not have medical insurance to cover the costs of necessary lifesaving medications and extensive regular medical tests. His condition will deteriorate if he does not receive the appropriate anti-rejection and antiinfection medications on a regular basis.

Rabin Medical Center perceives it as part of its commitment to Abu Chadaid Nabil, whose life we have saved, to do its utmost to ensure that he continues to live and flourish. Therefore, we are seeking the funds necessary to purchase the expensive medications necessary for his survival and continued welfare.

Bringing Back Their Smiles

With little time to spare in his busy schedule as the Head of the Department of Plastic and Reconstructive Surgery and Burn Unit at Rabin Medical Center, Dr. Dean Ad-El found his way to India to spend two weeks operating on Indian children born with a cleft lip and palate.

A 57-year-old man who used to blow the shofar in his synagogue until he was 17, when he suffered serious lung damage in a prank played on him, succeeded in blowing the ram's horn again for the first time.