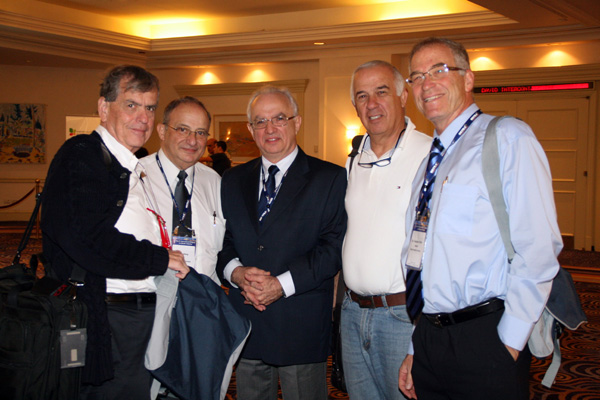 The 5th International Conference in Gender Medicine was recently held in Tel Aviv, bringing more than five hundred participants from nineteen countries around the world. Professor Marian Legato, president of the Foundation for Gender Medicine in New York and one of the leading pioneers in gender medicine, was one of the keynote speakers at the conference, as was Nobel Laureate Professor Aaron Ciechanover who spoke on the topic of "Personalized Medicine."

Dr. Eyran Halpern, CEO of Rabin Medical Center, welcomed the participants, stressing the importance of gender in 21st century medicine and the commitment of Rabin Medical Center to put gender on its agenda and to become a leading force in the promotion of this new science. The three day conference touched on the gender aspect in all fields of medicine including Cardiology, Psychiatry, Infectious Diseases Immunology and Pharmacology, Internal Medicine, Fetal development Neonatology, and Pediatric Endocrinology.

Professor Marek Glezerman, Director of the Helen Schneider Hospital for Women at Rabin Medical Center, has worked vigorously for the past two years to promote and advance gender medicine in Israel. During that time he founded the Israeli Society for Gender Medicine, organizing its first symposium in 2009 at Rabin Medical Center, initiated the first program for gender medical studies at Tel Aviv University's Sackler School of Medicine and received the 2009 Athena Global Leadership Award for his work in this field.

A the conference Professor Glezerman spoke on the growing field of Gender Medicine, "Not too many years down the road there will be no question about the necessity of Gender Medicine. On the contrary, it will be difficult to comprehend how we could ever have neglected the fundamental differences between the different body systems of men and women. Today we are actually re-writing many chapters of medicine and we are defining a new angle from which we look at diagnosis and treatment of women and men to the benefit of both sexes. We are proud that the young Israel Society for Gender Medicine is already on the forefront of this exciting development."

The American Friends of the Rabin Medical Center (AFRMC) held its annual Luncheon on Wednesday, April 29, 2015 at the Russian Tea Room in Manhattan to benefit Acute Myeloid Leukemia (AML) research.

In Memory of Our Chairman

American Friends of Rabin Medical Center and Board of Directors mourn with immense sorrow the passing of esteemed Chairman and beloved leader, Abraham "Barry" Cohen.