The Passing of Alfred Mann, Great American Inventor and a Friend of American Friends of Rabin Medical Center 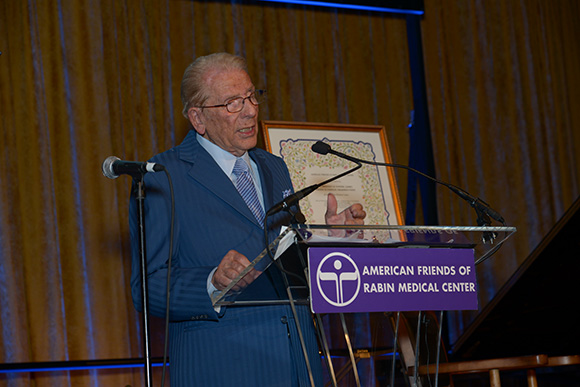 AFRMC mourns the passing of Alfred Mann and extends its sincere condolences to his wife Claude and the entire the Mann family. Alfred was a great American, an outstanding inventor of medical devices and a kind-hearted friend of AFRMC, together with his wife, Claude. His legacy lives on through his numerous discoveries and inventions and his outstanding philanthropic works.

Alfred E. Mann, who started medical device companies that pioneered in the development of pacemakers for erratic hearts, insulin pumps for diabetics, cochlear implants for the deaf and retinal implants for the blind, died on Thursday in Las Vegas. He was 90.

His death was announced by one of his companies, MannKind Corporation, which did not state the cause. Mr. Mann had been active in that company until Feb. 17, when he abruptly stepped down as chairman.

Mr. Mann, who spent most of his career in the Los Angeles area, became a billionaire from his entrepreneurial activities. His biggest success was MiniMed, which became the leader in insulin pumps, wearable devices that deliver insulin throughout the day, allowing people with diabetes to more precisely control their blood sugar levels.

Mr. Mann, who was chief executive of MiniMed for many years, sold the company to Medtronic for more than $3 billion in 2001.

“Al was a true pioneer and strong patient advocate,” said David Kliff, publisher of Diabetic Investor, which follows companies that make products for that disease. “Al touched the lives of millions of patients, mentored several notable executives and most of all never stopped trying to make life better for patients with diabetes.”

Mr. Mann was also behind Advanced Bionics, a manufacturer of cochlear implants. Another company, Second Sight Medical Products, won approval in 2013 for the first “artificial retina,” which uses electrodes implanted into the eye to provide rudimentary vision to people who are blind from certain diseases.

He also started the Alfred Mann Foundation, which does research to develop medical devices, and he established institutes for biomedical innovation that bear his name at the University of Southern California and at the Technion in Israel.

In all, Mr. Mann started and largely financed 14 companies, nine of which were acquired for a total of almost $8 billion, according to MannKind.

Alfred Mann was born in Portland, Ore., on Nov 6, 1925. His father, Charles, an immigrant from England, was a grocer. His mother, Anna, who was from Poland, was a singer and pianist, and musical talent ran in the family. Mr. Mann’s brother, Robert, a violinist, was a founder of the Juilliard String Quartet. His sister, Rosalind Koff, was a concert pianist.

Mr. Mann, however, turned to science. He received bachelor’s and master’s degrees in physics from the University of California, Los Angeles. He started two aerospace companies, Spectrolab and Heliotek, to fill contracts for the military.

Some of that work was to provide solar cells to power satellites. Because of that, he was asked in 1969 by researchers at Johns Hopkins University to work on longer-lasting batteries for pacemakers. Mr. Mann founded Pacesetter Systems, which introduced pacemakers with rechargeable batteries. It was acquired by Siemens in 1985 for $150 million.

In 1979, while running Pacesetter, Mr. Mann was visiting a cardiac ward and was challenged by a doctor there to work on diabetes, which caused many of the heart problems in patients. That led to the creation of MiniMed and later to MannKind, which developed a form of insulin that is inhaled instead of injected.

MannKind, Mr. Mann’s last big venture, may also have been his Waterloo, eating up much of his fortune.

The pharmaceutical giant Pfizer suffered a costly marketing flop with an inhaled form of insulin in 2007. After that, other big insulin manufacturers dropped their own plans for similar products.

But Mr. Mann, who was chief executive of MannKind for many years, would not give up. He insisted MannKind’s inhaler was better than Pfizer’s and that its insulin had desirable medical characteristics beyond being inhalable. He put about $1 billion of his own money into the company he had named for himself, keeping it afloat through years of setbacks.

“I believe this is one of the most valuable products in history in the drug industry, and I’m willing to back it up with my estate,” Mr. Mann told The New York Times in 2007.

The inhaled insulin, called Afrezza, was finally approved by the Food and Drug Administration in 2014, but sales have been dismal. In January, Sanofi, the big French drug company, pulled out of an agreement to market the product. MannKind is now in danger of going out of business, though it is vowing to survive.

“Our resolve is now stronger than ever to continue Al’s legacy of medical innovation, as a tribute to this remarkable man, who did so much to help mankind,” Matthew Pfeffer, chief executive of MannKind, said in a statement Friday.

Mr. Mann, who worked seven days a week even when he was in his 80s, was divorced three times.

He is survived by his wife, Claude; seven children, Howard, Brian, Rick, Carla Woods, Kevin, Al Jr. and Cassandra; his brother and sister, and 10 grandchildren.