Genetic BRCA Screenings: Knowledge Is Power in Our Fight Against Cancer 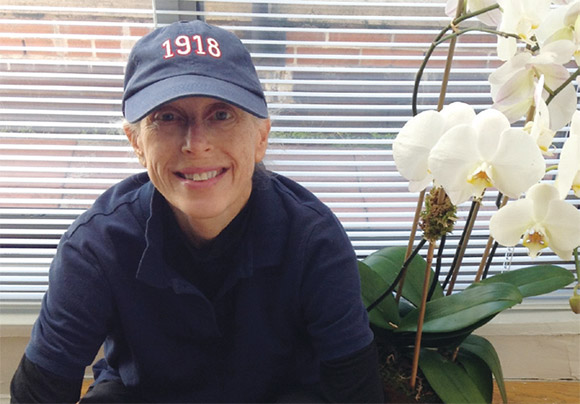 In September, 2015, at age 51, I was diagnosed with ovarian cancer. My immediate reaction was relief. I had felt awful for months, with pain in my upper chest and weird bloating in my stomach and legs. I passed off the symptoms as stressrelated and continued my day to day life.

I lost my mom when she was 50 to smoking-related lung cancer. As a nonsmoker, I lived a very healthy life-style with lots of exercise and organic eating. Cancer was not something I ever thought about. Ovarian and gynecological cancers did not run on either side of my family so it never dawned on me to receive genetic testing.

I was blessed to fi nd Dr. Stephanie Blank, a leading gynecological oncologist at NYU Langone. Dr. Blank placed me front and center on the road to recovery. At my fi rst appointment, she asked me to participate in a study she was conducting on BRCA mutations. It required me to have genetic testing. Feeling overwhelmed and terrifi ed, I said no. I did not have children and did not want to know about any mutations. How naïve I was just a few months ago!

A few days later, my younger brother, Laurence, who has been at my side throughout this journey, asked me to have the genetic tests. His daughter Nadia is 9 years old and he wanted to know if she had a chance of carrying the mutation. Nadia is the light of my life, and so I said yes right away.

Jessica Martineau, the genetic counselor at Dr. Blank’s office explained with empathy, brilliance and kindness, the high-risk that Ashkenazi Jews have for carrying the BRCA mutations. I learned that men can carry the BRCA mutations as well. It was the most fascinating lesson in science I have ever heard.

Six weeks later, with Laurence once again by my side, Jessica gently told me that I carried the BRCA 2 mutation. But there was a bright side. Patients who know they carry the gene, have better outcomes in treatment. Knowledge was now my power!! Jessica then asked my brother to participate in the study. He could not back down! Six weeks later, he found out that he too carried the BRCA 2 mutation. Being forewarned, he is now forearmed!

Laurence is now under the care of a high-risk hereditary disease oncologist. Knowledge is now his power, too!!

With the unbreakable love and support of my parents, family and close friends, and the wonderful team of Dr. Blank and her staff, I am literally “schlepping” this year to raise money and awareness for the BRCA Multi-Disciplinary Screening Clinic at the Rabin Medical Center in Israel. It will be a few weeks after my fi nal chemotherapy treatment and surgery. Next year, I will run!

Gastroesophageal Cancer Tied to Weight as a Teen

Israelis who were overweight as teenagers were more likely to have esophageal or gastroesophageal junction cancers later in life, researchers reported.