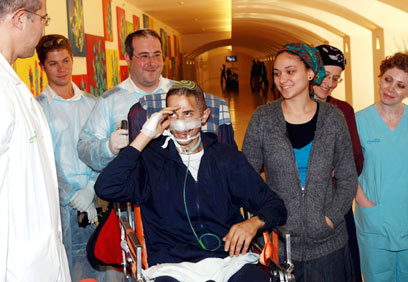 Aharon Karov, the newly-married 22-year-old IDF officer in the paratroopers who went to war in Gaza a day after his wedding and was critically wounded, has been discharged from the hospital today and is recuperating nicely. Three weeks after they had given him just hours to live he saluted his doctors farewell, and left accompanied by his new wife, Tzvia, 19. He had suffered acute wounds after entering a house that had been booby-trapped by Hamas. He spent 14 hours in surgery at Rabin Medical Center, undergoing a series of operations all in one day. He had neurosurgery, an operation on his left eye to remove shrapnel, operations on his mouth and jaw, and ear-nose-and-throat surgery.

He had a helmet protecting his head, but shrapnel went through his face and his skull. His chest and abdomen were protected, but he suffered wounds to his arms and legs. Professor Pierre Singer, head of the Intensive Care Department at Rabin Medical Center, suggested to the IDF chief medical officer that they consider equipping soldiers on the battlefield with clear visors covering their faces, as this could prevent many facial and head injuries. The IDF doctor told Professor Singer that the IDF would definitely consider it.

Professor Singer believes that Aharon has suffered no permanent damage to his brain. He will need plastic surgery and will have permanent scars. He is still in considerable pain. His new wife Tzvia and his family are amazed by the excellent improvement in his condition. Professor Singer stated that "The excellent care on the air ambulance and very aggressive operations and intensive care in the hospital made the difference."

Everybody walks into an Emergency Department at some point in their life and the medical services they receive often make the difference between life and death.

The annual American Friends of Rabin Medical Center Women's Luncheon was hosted by the Israeli ambassador to the United Nations and his wife, Ambassador Dan and Janice Gillerman, in their Manhattan home.

In Haiti: Israeli Doctor Saves Lives Among the Ruins

A first-hand report on the Haiti rescue efforts
by Dr. Anatoly Pirotsky - Surgeon at Rabin Medical Center's Department of Orthopedics